How to read and What to read from this chapter?

You need not to read this chapter deeply, in depth study is not required at all. Focus on two things from this chapter,i.e.,

Below a brief note and important points are mentioned along with a table which will be helpful for your UPSC preparation.

The stone age is the ancient time frame, i.e. the period before the improvement of the script, consequently the principle wellspring of data for this period is the archeological unearthings. The first Palaeolithic tool was discovered in India by Robert Bruce Foote and the tool was Pallavaram handaxe. 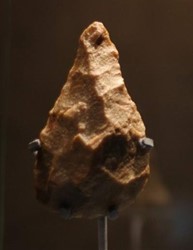 Indian stone age can be classified into three types on the basis of geological age, types and technology of stone tools.

The time frame of this age are given in the following:

The word Palaeolithic has been derived from two words; ‘palaeo’ (which means old) and ‘lithic’ (which means stone). Hence, the term Palaeolithic refers to the old stone age. The Palaeolithic age in India is divided into three phases according to the stone tools used by the people and nature of change in the climate. The phases are given below:

Overall features of Palaeolithic age were:

The Upper Palaeolithic Age came to an end with the end of the ice age around 8000 BC. Climate was changing that time and it brought changes in fauna and flora and made it possible for human beings to move to new areas. From then a phase came which is considered to be an intermediate phase between the old stone age or the Palaeolithic age and the new stone age or the Neolithic age.