In a significant step backwards for women’s rights in the U.S.,the Supreme Court overturned the landmark Roe v. Wade judgement of 1973, which gave women in America the right to have an abortion before the foetus is viable outside the womb or before the 24-28 week mark.

Abortion rights, which have been available to women for over two generations — will now be determined by individual States.

How did abortion laws come about in India? 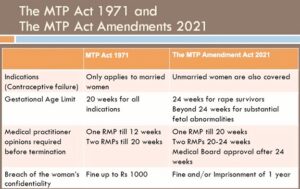 Confidentiality: The “name and other particulars of a woman whose pregnancy has been terminated shall not be revealed”, except to a person authorized in any law that is currently in force according to 2021 law.

Judicial interventions in cases of abortions:

Justice K.S.Puttaswamy v. Union of India and others: The Supreme Court had held that the decision by a pregnant person on whether to continue a pregnancy or not is part of such a person’s right to privacy as well and, therefore, the right to life and personal liberty under Article 21 of the Constitution.

Calcutta High Court: It allowed a 37 year old woman, who was 34 weeks into her pregnancy, to get a medical abortion as the foetus was diagnosed with an incurable spinal condition. This judgment allowed abortion for the furthest gestation in the country so far.