PEACE WITH THE MAOISTS

PEACE WITH THE MAOISTS

The Chief Minister of Chhattisgarh, Bhupesh Baghel, recently announced that the State government are ready for peace talks with the Maoists provided they laid down arms and expressed their faith in the Constitution of India.

Origin of Naxalism in India:

Steps taken by the Government

Apart from plugging all the above mentioned loopholes in the present strategy of fighting naxalism in India, this needs to be recognised by the civil society and the media to build pressure on the Left Wing Extremists to eschew violence, join the mainstream and recognise the fact that the socio-economic and political dynamics and aspirations of 21st Century India are far removed from the Maoist world-view. 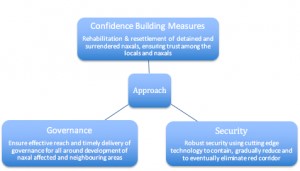