Recently, the Centre has defined a list of single-use plastic items that will be banned from 1st July 2022. 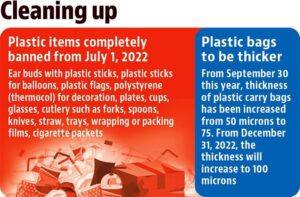 As the name suggests, it refers to plastic items that are used once and discarded.

The manufacture, import, stocking, distribution, sale and use of notified single-use plastic, including polystyrene and expanded polystyrene, commodities shall be prohibited with effect from the 1st July, 2022.

Why are Single-Use Plastics disastrous?

How will the ban be enforced?

How do other nations handle single-use plastic?