1) INS SINDHUDHVAJ: The Navy’s Kilo-class submarine, INS Sindhudhvaj, was decommissioned from service on Saturday at Visakhapatnam after 35 years in service. With this, the Navy now has 15 conventional submarines in service.

2) ‘Bonalu’: is a Hindu Festival where Goddess Mahakali is worshiped.

3) Monkeypox: It is a viral zoonotic disease (transmission from animals to humans) and is identified as a pox-like disease among monkeys hence it is named Monkeypox. It is endemic to Nigeria. 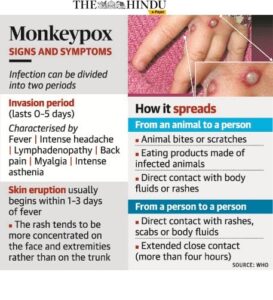 4) Grey Water: Grey water is the category of waste water that is not contaminated with faecal matter or urine.