2) Twin deficit: Current Account Deficit and Fiscal Deficit (also known as “budget deficit” is a situation when a nation’s expenditure exceeds its revenues) are together known as twin deficits and both often reinforce each other, i.e., a high fiscal deficit leads to higher CAD and vice versa.

4)  Lingayats: Lingayats are followers of Basavanna, the 12th-century social reformer who rebelled against Hindu society and established a new dharma. 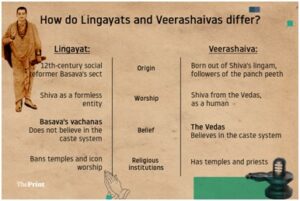 5) Virasaivism:  means the Saivism of the stalwarts or heroic Saivism.