1) Hermit: it is a spyware (on the lines of Pegasus) developed by an Italian vendor called RCS Lab

2) Partners in the Blue Pacific: The PBP is a five-nation “informal mechanism” to support Pacific islands and to boost diplomatic, economic ties in the region.

3) Horn of Africa: it is the easternmost extension of African land and includes the region that is home to the countries of Djibouti, Eritrea, Ethiopia, and Somalia, whose cultures have been linked throughout their long history. 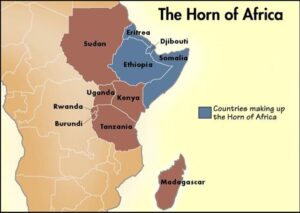 4) P C Mahalnobis: He is considered the father of modern statistics in India, founded the Indian Statistical Institute (ISI), shaped the Planning Commission.

5) Partnership for Global Infrastructure and Investment (PGII): launched by G7 countries, it is an initiative to fund infrastructure projects in developing countries and counter China’s Belt and Road Initiative.