1. Spread in the Community (Community transmission)

Stages of spread according to WHO:

India and Sri Lanka have a legacy of intellectual, cultural, religious, and linguistic interaction, and the relationship between the two countries is more than 2500 years old. 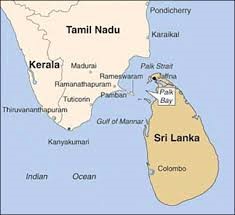 India is the only neighbour of Sri Lanka, separated by the Palk Strait; both nations occupy a strategic position in South Asia and have sought to build a common security umbrella in the Indian Ocean.

This island nation lies astride the major sea lanes of communication from Europe to East Asia and the oil tanker routes from the oil producing countries of the Gulf to China, Japan and other Pacific countries.

In the military sense it is important to the United States as these same sea routes are used for transference of naval power from the Pacific Ocean to the Indian Ocean and the Gulf.

For the Indian Navy, it is important as the switching of naval fleets from the Bay of Bengal to the Arabian Sea and vice versa the fleets have to take a round of Sri Lanka.